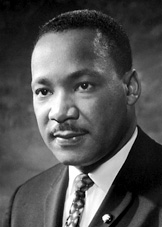 Today marks the 40th anniversary of the assassination of the Rev. Dr. Martin Luther King, Jr. The following is an excerpt from a sermon he delivered at Ebenezer Baptist Church in Atlanta, Georgia, on 4 February 1968. Dr. King was indeed a drum major for justice. May we all commit to live life like Dr. King and be drum majors for justice, peace righteousness and ending homelessness.

The following is a portion of his sermon.To read all of the sermon click here.

I’d like somebody to mention that day that Martin Luther King, Jr., tried to give his life serving others. (Yes)

I’d like for somebody to say that day that Martin Luther King, Jr., tried to love somebody.

I want you to say that day that I tried to be right on the war question. (Amen)

I want you to be able to say that day that I did try to feed the hungry. (Yes)

And I want you to be able to say that day that I did try in my life to clothe those who were naked. (Yes)

I want you to say on that day that I did try in my life to visit those who were in prison. (Lord)

I want you to say that I tried to love and serve humanity. (Yes)

Home » Posts » Today let us remember the drum major for justice
Subscribe to Our Free Newsletter!