Households Living on Edge of Homelessness 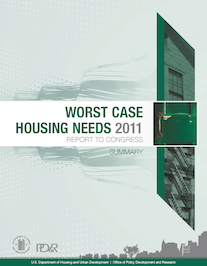 In a summary released on February 22, HUD reports a dramatic rise in the number of families with very low incomes (at or below 50% of the median income in their area) who paid more than half their monthly income on rent, lived in severely substandard housing, or both.

“These sobering numbers remind us that as we work to craft a balanced approach to our budget and priorities, we can’t lose sight of those who may be teetering on the brink of homelessness,” said HUD Secretary Shaun Donovan in a press release about the report.

According to the summary,

HUD concludes that the significant increase in the number of very low income renters with worst case housing needs is primarily due to the substantial number of homeowners who became renters as a result of poor economic and housing market conditions such as high unemployment rates and the foreclosure crisis. There was also a fairly significant uptick in new household formation. These two factors accounted for 53% of the total increase in worst case housing needs.