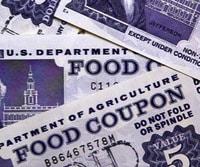 Congressmen Frank LoBiondo and Chris Smith joined all of the Democratic members of the NJ House Delegation in opposing a $40B cut in food stamps over the next decade.

Overall the legislation was approved 217 to 210 with 6 abstentions. Only fifteen moderate Republicans, including LoBiondo and Smith, opposed the legislation.

Robert Greenstein of the Center for Budget and Policy Priorities issued this statement:

“By cutting food assistance for at least 3.8 million low-income people in the coming year — including some of the very poorest Americans, many children and senior citizens, and even veterans — this cruel, if not heartless, legislation could jeopardize a vital stepping stone to many families who are still struggling to find work or who depend on low-wage jobs. As the nation slowly climbs out of the deepest recession in decades — with 22 million people still unemployed or underemployed — millions of families rely on SNAP to help feed their children.

“SNAP recipients already are preparing for an across-the-board cut in their SNAP benefits beginning in November that will reduce their modest benefits to less than $1.40 per person per meal.”

“This bill eliminates loopholes, ensures work requirements, and puts us on a fiscally responsible path. In the real world, we measure success by results. It’s time for Washington to measure success by how many families are lifted out of poverty and helped back on their feet, not by how much Washington bureaucrats spend year after year.”

This is how NJ’s delegation voted: