Relief Should Include
Increased Funding for Non-Defense 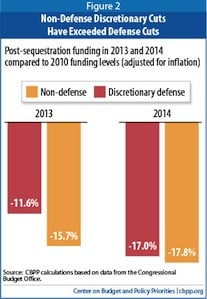 As Congress dithers, the Center for Budget and Policy Priorities (CBPP) has released a new report “Clearing Up Misunderstandings: Sequestration Would Not Be Tougher on Defense Than Non-Defense Programs in 2014.”

Quoting from the report,

“If sequestration remains in effect, non-defense discretionary funding in 2014 will be at about the same level as in 2013, while defense funding will be $20 billion below its 2013 funding level. This would occur largely because Congress made one-time changes to the BCA in the ‘fiscal cliff’ bill that caused defense to be cut $20 billion less in 2013 than the BCA would have originally required under sequestration. In contrast, these changes had little net effect on funding for non-defense programs in 2013, causing it to be cut by roughly the same amount as originally called for.

“The impression some have that the 2014 sequestration will hit defense harder than non-defense programs — or target defense disproportionately — is mistaken.

“Moreover, policymakers have cut non-defense discretionary programs more deeply than defense since 2010, when they began efforts to shrink deficits, and this will continue to be the case in 2014 even if sequestration remains in effect.

“Thus policymakers should resist calls to provide relief from sequestration only to defense programs; any relief should also include increased funding for non-defense discretionary programs, adhering to the BCA’s core principle of maintaining parity in sequestration cuts between defense and non-defense.”