Medicaid Is Efficient and Effective 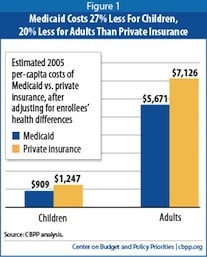 In a recent report, the Center for Budget and Policy Priorities (CBPP) explains five realities that dispel myths about Medicaid, including:

As states consider whether to adopt health reform’s Medicaid expansion and some federal policymakers promote radical structural changes in the program, critics have circulated a number of myths about Medicaid.

This brief report corrects five of these myths by providing the corresponding reality for each.