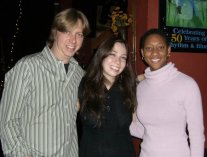 Rich Kubicz of Let's Rock America, Melinda Davis of Melinda Davis and the Eleventh Hour and Taiisa Telesford of Monarch Housing at the 2007 Blankfest.

Blank-Fest is an annual benefit concert, usually held one-to-two weeks before the holiday season, which raises blankets for the homeless.

Admission to the concert will be the donation of a blanket, coat, or $10 donation which will be donated to Project Homeless Connect events across New Jersey. This is the third year the event will be held in New Jersey!

Volunteers are needed to help collect blankets at the door. To volunteer to help with this year’s event click here. For more information click here

Blank-Fest IV has an all-star lineup!

With 11 bands lined up, this all day benefit concert will raise much needed blankets and awareness about homelessness in the state of New Jersey.

New Jersey Blank-Fest 2010 will be held Sunday, February 21, 2010 from 12pm – close. Bands performing at the concert this year include:

Spread the word and come out to this year’s exciting Blank-Fest event and let’s make this year a huge success!