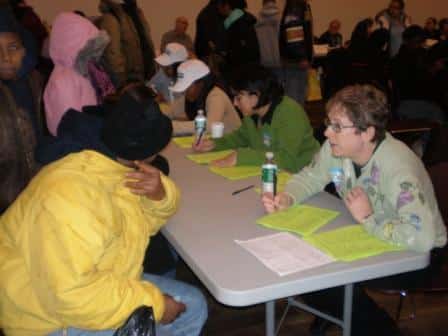 The flashbacks and delusions seemed more vivid behind closed doors, so the Vietnam War veteran decided to spend the rest of his life outside.
Lorenzo “Jamaica” Banks found a patch of woods in downtown Camden – next to the Route 676 exit ramp, behind the Police Department and around the corner from Campbell Soup’s world headquarters. He cleared out the syringes and put up a tent.

That was two years ago. Now there are 17 people, all invited by Banks, living in what’s known around town as Tent City.

Banks, 56, is “mayor” of the makeshift village, which he oversees with a second-in-command – his “CEO,” he says – who is in charge when Banks leaves to buy supplies. There are rules (including weekly tent inspections) posted on a bulletin board. The city of Camden even picks up the trash, neatly stacked in bags along the train tracks.
…

CAMDEN, N.J. – The streets of this city are a place people end up when their lives fall apart. And the people who live there say that in the rough economy, they are finding they have more neighbors.

They seem to keep coming,” said 53-year-old Neil Floyd, who sleeps under a tarp in a wooded area near downtown called Tent City.

On Wednesday, officials were trying to gauge how many more.

Social service workers and volunteers set out across Camden and the state as part of a homeless count they complete most years. The results of the census, along with those being conducted in all 50 states this week, are forwarded to the federal Department of Housing and Urban Development.